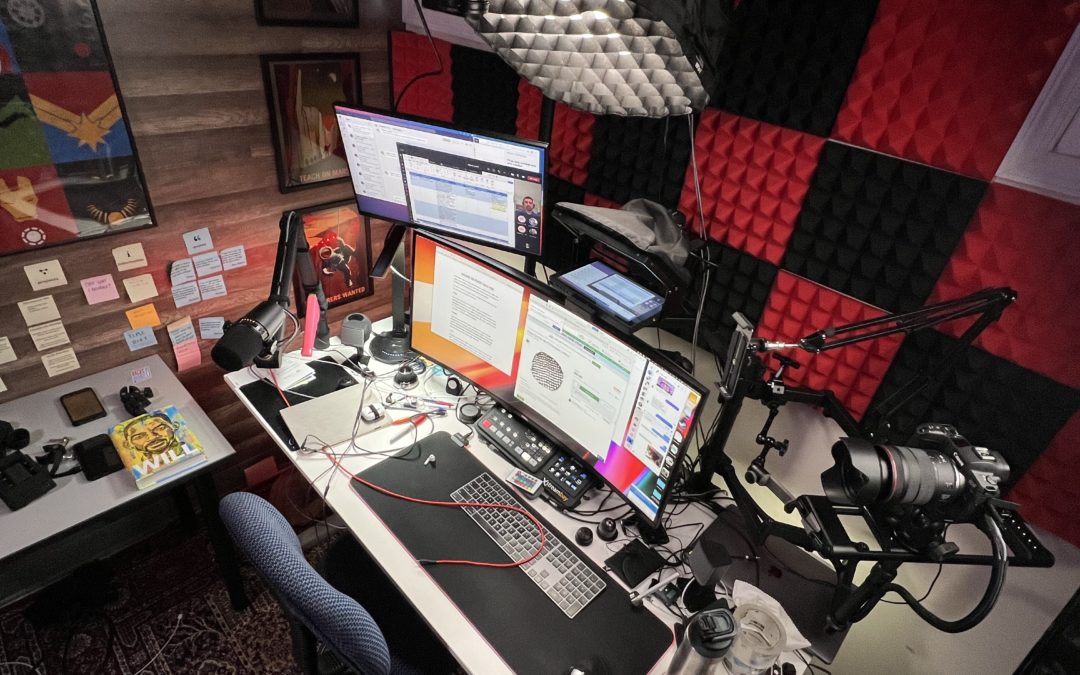 Farewell to the 2018 MacBook Pro, Time for an Upgrade to the M1 MacMini.

I’ve been in love with my MacBook Pro 15″ 2018 model since I picked it up. It has certainly been the most expensive Mac that I’ve purchased to date. It was a custom order with 32GB ram a 2.6GHz 6-core i7 and a powerful GPU.

After using it to do everything I love, graphics, video editing, audio editing, live-streaming, and gaming this has stood pretty solidly, whilst driving a Dell 34″ Ultrawide Screen over a Belkin thunderbolt dock and now the Dell 38″ Ultrawide monitor.

I feel like I need an upgrade. But maybe is it time to completely wipe it clean and start fresh? Just install the apps that I use daily. What’s also crazy is that I’m using Office products, Google products, AND Apple work products. It’s really hard to stick to one platform Because of the projects and people I work with.

MS Products are being used by projects I’m on, Pages, Numbers, and Keynote for freelance projects, and the Google Suite for collaboration with folks around the world.

Maybe I just need to simplify.

I’ve been getting that loud fan noise issue on my 2018 MacBook Pro for the past few months. And it’s gotten worse. I did remove a lot of extraneous apps so it’s helped a bit more. But when I’m editing videos or running Ecamm Live or playing a game or two on Steam those fans kick up a storm. Now I did open it up and cleaned out the fans because I thought maybe it’s not able to move that air fast enough. After all, it’s just sat in the same place for almost 3 years. With the new MacBook Pro 16.2″ with the M1Pro/M1Max. I’m almost thinking the MacMini M1 would be an excellent replacement since I already get leaps and bounds more power with the M1 at the fraction of the price.

So maybe get the M1 Mac Mini?

But the MacBook Pro M1Pro/Max offers 64GB of ram and 3 to 4 large displays (I only use 2) Maybe an overkill. Instead of the MBP M1Pro/Max for 4K.. get a new M1 Mac Mini every year for 4 years.. and it’ll cost the SAME.

No more ‘Doorbell’ category in HomeKit accessories page on Apple.com

With the recent acquisition of Ring doorbell company by Amazon, it just seems like we’re moving further away from collaborating on technology platforms.

One of the biggest reason behind the disconnect is the fact that Apple spends a lot of time in making sure the services and products they support follow a strict protocol for security. Enabling multiple levels of encryption to deter hackers and missteps.

Check out the source for some more information regarding the “doorbell” purge.

Is Apple following in the footsteps of Amazon, Berkshire Hathaway and JPMorgan Chase in creating their own network of Health Clinics?

It’s quite possible that Apple’s been working on this initiative for at least 2 years if not more given that the Apple Watch has been around for a good part of almost 3 years, released on April 24, 2015. But research on the device might’ve started 2 years prior.

The Apple Watch gave apple a direct link to enabling health-conscious individuals and athletes a way to track their heart-rate and other health-related information with the well-established Health app which had successfully been tracking other human activities such as counting steps, flights climbed, heart-monitoring & blood pressure monitoring via 3rd party apps and devices.With the launch of HealthKit in 2014 with support and research partnership with major US hospitals such as Mayo Clinic, Ochsner, Stanford University Hospital and Duke University to name a few. Apple had already built relationships with Hospitals and Clinics.

As the Apple Watch was released it helped health providers to track heart-rate directly from the users and this cause a relationship as well as research information coming back to health providers via the ResearchKit in 100 folds.

Not only were the people using their Apple Watches to track their own fitness, health-care providers had access to data that was previously not possible to acquire with such ease.

As it turns out, Apple had been working in secrecy (big surprise) with other providers and creating these clinics to start with providing support and health to their own employees. It’s certainly a noble movement and completely makes sense. Why not provide healthcare (a major requirement for being a human being) everyone like literally everyone needs access to these basic needs. So a company creating solutions for their own employees simply falls into place as part of the benefit an employee can not have to think twice about.

We spend 1/3rd if not more of our life working for a company, spending our precious time in creating solutions and helping the overall cause of the company forward. No matter who you are. You need healthcare, and if the company you work for is paying for your health-insurance the Health industry has been taking advantage of the corporations (LOL) in charging more and more over the years.

Hopefully, this move will start the much-needed disruption.

In health and wellness. Let us embrace this new future with open arms and Apple Watches for everyone 🙂

This article was originally published on Linkedin.com pulse.

Announced today at the Apple Event, Nintendo chose to bring Mario to iOS.

New Battle Mode, where you can compete with other users around the world!

5 things to consider when launching your first app

Excellent article by Maximilian Hennebach on launching your first app.

I accidentally sent all app downloads a push notification. This was right at midnight on the east coast, so I felt very bad for any people who may have been disturbed. If it was me, I’d be pissed.

Americans receiving their Apple Watch on Friday are being emailed an invitation to schedule an online Personal Setup session, guiding them through setting up and using the device without having to visit an Apple Store.